Yield curve construction is at the core of the pricing of virtually all trades and is rather complex to configure. As for most objects it is best to create a new curve by copying an existing one (i.e. doing a ‘Save As’), but it may not be easy to know which existing curve is of a type that is closest to the desired one.

Note that the above represents a simplified view only. In practice there are more types of underlying quotes and dependency patterns:

CSA curves in our library are what we call curves that are not obtained directly from quotes but instead using the ‘forward FX invariance’, i.e. the assumption that the forward FX rate is independent of the collateralization. This assumption makes it possible to obtain discount factors in cross-currency situations where there are no quotes available in the market to imply a curve.

Take the example of USD cash-flows collateralized in JPY. These flows should be discounted with a USD curve with JPY basis. Such a curve should be built from quotes of cross-currency USD/JPY swaps collateralized in JPY, such that we would be able to imply a USD discount curve. Unfortunately such quotes do not exist (to our knowledge), and thus the needed curve is in principle unknown.

CTD curves are a simplified way of pricing in the optionality due to the choice of collateral currency. The basic principle underlying the construction is to create a grid of time intervals (ideally daily but more realistically larger) and on each interval to choose the forward rate to be the optimum one among the eligible discounting curves. The whole discount curve is then backed out from its forwards.

Taking the example of a cross-currency curve, the configuration screen will typically look like 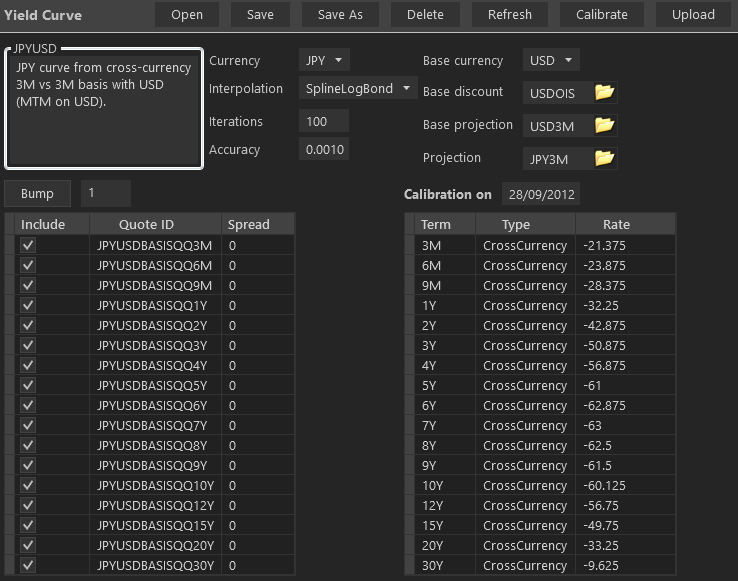 The other typical inputs are the market rates in the left datagrid, which can be chosen with right-click of the mouse. Of course, these market rates must have been created previously for them to be available as choices. Market rates are created from Market->Quotes->Interest Rates.

The remaining inputs are specific to the cross-currency curves, in that they specify the dependency structure.